The AWS D17 Committee on Welding in the Aircraft and Aerospace Industries just released the third edition of D17.1 Specification for Fusion Welding for Aerospace Applications. Last revised in 2010 and amended in 2012, the publication of this revision affords the perfect opportunity to trace the evolution of welding in aviation and aerospace that culminated in the important changes to this newest edition of D17.1. We’ll take a closer look at some  of those changes in the second half of this article, but before we do, let’s turn the clock back 100 years to see how we got here.

Welding in aircraft can be traced back to the early days of aviation, thanks in part to Reinhold Platz. Initially hired as a welder by aviation pioneer and manufacturer Anthony Fokker, Platz quickly rose to become Fokker’s head of engineering. In the age of wood and cloth airplanes, the formally unschooled Platz used his knowledge of welding to design the iconic Fokker Dr.1 triplane (1917) with a welded steel tube girder fuselage. None other than the “Red Baron” (Manfred Albrecht Freiherr von Richthofen), used the plane to claim 19 of his 80 kills before suffering the same fate in the closing days of World War I (1914-18).

Another Fokker engineer by the name of Robert B.C. Noorduyn also used welded steel tube construction for the fuselage and tail of the Fokker Universal. Produced in Fokker’s New Jersey factory between 1926 and 1931, the rugged utility aircraft quickly gained a reputation as a reliable carrier of passengers and cargo. In fact, Charles Lindbergh wanted to use the Universal for his history-making solo flight across the Atlantic, but the company wouldn’t sell him one for fear of bad press if he failed.

Despite these early successes, manufacturers moved on to riveting as the primary method for joining the lightweight aluminum alloys most often used to fabricate planes. However, the advancement of welding in the aircraft industry once again began to gain momentum in 1941 when Russell Meredith of Northrop Aircraft developed Gas Tungsten Arc Welding (GTAW) in an effort to weld magnesium with an electric arc. The 1957 launch of Sputnik and the ensuing space race between the Soviet Union and the United States provided another significant push in the design of welded aluminum structures and the development of new welding techniques, including electron beam welding (EBW), plasma arc welding (PAW), laser welding (LW), and friction welding (FRW).

Curiously, welding inspection did not quite keep pace with the rapid pace of innovation that characterized the aviation and aerospace industries after World War II (1939-45). In fact, prior to 1977, the aviation industry relied on four military standards, MIL-W-8604 [aluminum], MIL-W-18326 [magnesium], (MIL-W-8611 [steel], and MIL-T-5021 [welder performance]), that referenced welding technologies and acceptance criteria dating back to the 1950s. In that year, members of the aviation and aerospace industries joined with government representatives to update some of these standards by consolidating MIL-T-5021 welder performance specifications in MIL-STD-1595. However, having been published as a 17-page addendum to ASME Section IX code, MIL-T-STD-1595 was soon revised and superseded by the more substantial MIL-STD-1595A in 1983. Meanwhile, in 1982, a new edition of MIL-W-8604 (MIL-W-8604A) finally updated the mid-century welding process specifications that had been enshrined in the document since it was first published in 1953. Just five years later, the industry took another major step by consolidating the previously mentioned military standards for aluminium (8604), magnesium (18326), and steels (8611) into MIL-STD-2219 Fusion Welding for Aerospace Applications.

The publication of MIL-STD-2219 in 1988 represented the most signiﬁcant change to aviation welding standards in more than 30 years. However, this specification did not satisfy the industry, and after two unsuccessful attempts to change the military standards, the American Welding Society contacted industry members and proposed a meeting to develop a national specification. Interested welding personnel from the aviation industry gathered together in the autumn of 1993 to lay the foundation for a national aviation and aerospace welding specification to replace MIL-STD-1595A and MIL-STD-2219. This meeting led to the formation of AWS D17 Committee on Welding in the Aircraft and Aerospace Industries.

The committee, composed of a wide variety of representatives from the private and public aviation and aerospace sectors, labored over the next several years to produce a welding specification that reflected the latest technological advances in welding and welding materials. That specification, published in 2001, was the first edition of D17.1 Specification for Fusion Welding for Aerospace Applications. Since then, the D17.1 committee has periodically updated the code to reflect changes affecting everything from welding processes to inspection equipment. 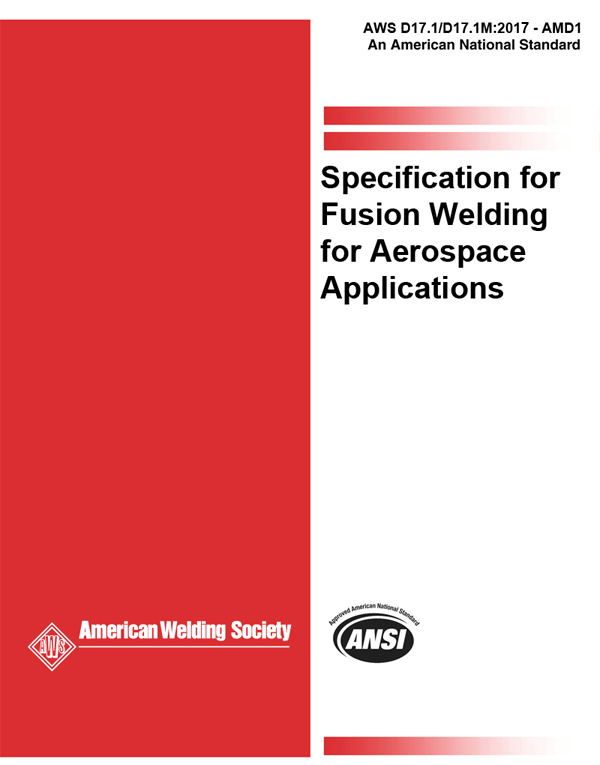 The D17.1 Specification for Fusion Welding for Aerospace Applications provides the general welding requirements for welding aircraft and space hardware. It includes, but is not limited to, the fusion welding of aluminum-based, nickel-based, iron-based, cobalt-based, magnesium-based, and titanium-based alloys using electric arc and high energy beam processes. There are requirements for welding design, personnel and procedure qualiﬁcation, inspection, and acceptance criteria for aerospace, support, and non-ﬂight hardware. Additional requirements cover repair welding of existing hardware.

The following list includes some of the major revisions included in the 2017 edition of AWS D1.17. Make sure to review a copy of the new code for other changes that may not be covered here.

When does the new 2017 edition of the D17.1 specification go into effect?

Now that the D17.1 committee has completed the new edition of D17.1, the AWS Certification Department will get to work on updating the CWI exam accordingly. CWI test candidates that choose to test to the D17.1 specification for the Part C-Code Book portion of the CWI exam will continue to use the previous 2010 edition which was amended in 2012. The same holds true for CWIs who want to take the D17.1 endorsement exam in order to comply with the requirements for 9-year recertification. The AWS Certification Department will notify prospective exam applicants of the switch to the 2017 edition well in advance. However, you can always check the CWI Body of Knowledge for the most up-to-date information about which edition of a code is being used for AWS exams.

While AWS does not specify when and how its standards are adopted by industry, The National Aerospace and Defense Contractors Accreditation Program (NADCAP) will be looking into updating its D17.1 Audit Checklist at its October 2017 meetings. Currently, the D17.1 standard states in its Scope (Clause 1.1) that “When this specification is stipulated in contract documents, conformance with all provisions of the specification shall be required, except for those provisions specifically exempted or modified by the Engineering Authority or contract documents.” Therefore, the edition specified in the fabricator’s contract is what determines whether or not they must use D17.1/D17.1M:2017 or its predecessor. If this is not noted in the contract, it appears the Engineering Authority has the final say on which version to use.

2 thoughts on “A Century of Innovations in Aerospace Welding Culminates in a New Edition of D17.1”