In my last post I mentioned the trouble that Katana Summit, a wind turbine manufacturer in Nebraska, was having finding welders. A glance at CareerCast.com’s widely parroted Top 10 Worst Jobs list would have you believe that the only thing worse than being a welder is being an EMT, taxi driver, lumberjack, ironworker, or roustabout. However ridiculous this may sound, one thing remains clear: lots of young people looking for information about future career choices may take CareerCast.com’s yearly list at face value.

The negative 3-D stereotype that portrays welding as a dirty, dangerous, dead-end job is being countered by educational initiatives such as the NSF-funded Careers in Welding web portal and websites like Go Welding.org, though more can always to be done to inform the greater public about the wide variety of experiences and industries that comprise the field of welding.

Still, a negative image does not fully account for the lack of new welders entering the field at a time when wages are competitive and employment opportunities are increasing. The fact is that many willing would-be welders simply do not have the appropriate knowledge and skills. A survey on talent in the manufacturing industry published in October 2011 by Deloitte and The Manufacturing Institute reported that 67% of respondents were experiencing a moderate to severe shortage of available, qualified workers and 56% expected the shortage to grow worse in the next three to five years. The survey also found that 5% of current jobs—as many as 600,000 skilled positions—are unfilled due to a lack of qualified candidates.

Welding is no exception. The Bureau of Labor Statistics’ 2010-2011 Occupational Outlook Handbook for Welding, Soldering, and Brazing Workers reports that many welding employers are having difficulty finding properly skilled welders, one major indication that the welder shortage goes well beyond the confines of Nebraska. 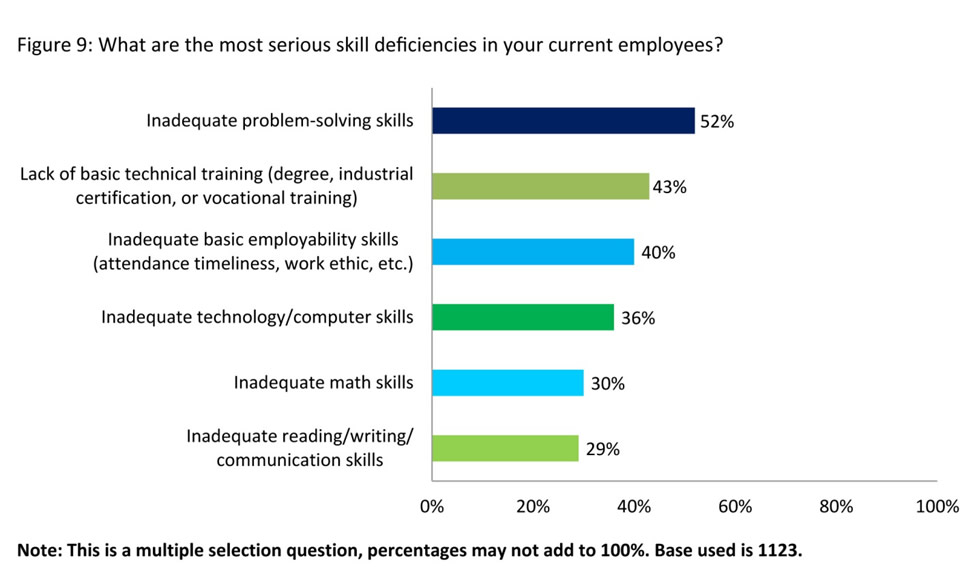 The bad news is that math, science, and reading scores of U.S. students continue to lag behind their counterparts in most other industrialized countries precisely at a time when U.S. manufacturers are implementing the latest technologies in an effort to remain competitive in a global market. The good news is that a host of initiatives in the private and public sectors are genuinely attempting to address the skills gap in all sectors of U.S. industry.

From nationwide programs like Skills for America’s Future to more local, and curiously wordy, efforts like Promoting Rigorous Career and Technical Education Programs of Study Program, the race is on to educate a work force for the 21st century. The manufacturers that responded to the Deloitte and Manufacturing Institute survey may have reason to take heart. On the first very first page of their instructional framework definitions, the aptly named Partnership for 21st Century Learning informs participating teachers: “Within the context of core knowledge instruction, students must also learn the essential skills for success in today’s world, such as critical thinking, problem solving, communication, and collaboration.”

However, the onus is on everyone, not just teachers and employers with a direct stake in educational and commercial outcomes, to do what we can to guide, coach, inspire, or otherwise help the young people in their lives to look beyond their present horizons.

Manufacturing in general, and welding in particular, is vital to the U.S. economy. Having ceded the cheap-labor/thin-profit margin sectors like consumer electronics, toys and shoes to countries like China and Indonesia, the United States needs a more knowledgeable and skilled work force to make more complex and expensive goods such as fighter jets and computer chips.

The issue will define the future of the American economy. Without a labor force capable of critical thinking—comprehensively defined as the mental process of actively and skillfully conceptualizing, applying, analyzing, synthesizing, and evaluating information to reach an answer or conclusion—we simply cannot sustain the kind of scientific and industrial innovation that quickly turned the Wright Brothers’ flyer, the Model-T, and the transistor into multi-billion dollar industries. It’s up to us…

Deloitte and The Manufacturing Institute

The Bureau of Labor Statistics

2 thoughts on “Are tomorrow’s would-be welders too dumb to succeed?”